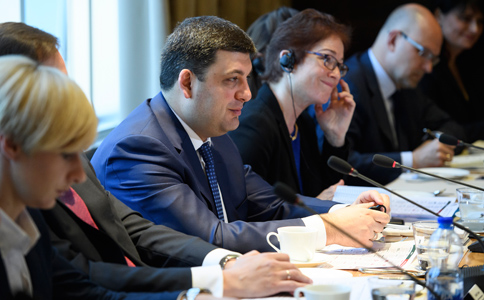 On the outcomes of the activities of 2016 as well as of the first quarter of 2017 the country demonstrates a positive trend of gradual economic upturn, and this should be the basis and the key to leverage investment in the country and to ensure implementation of successful projects in the real sector. This was stated by Prime Minister of Ukraine Volodymyr Groysman in the course of the meeting with the leadership of the American Chamber of Commerce. The meeting was also attended by Plenipotentiary Ambassador of the USA in Ukraine Marie Yovanovitch.

“The most crucial is that we managed to establish a dialogue, to understand each other and to raise the question not from meeting to meeting, but in the process. We set the tasks and we tackle them, said the Head of Government. Ukraine is on the track of economic growth now and this is movement in the direction of increasing investment.

The Prime Minister reminded representatives of the business community the Government’s core objectives for this year are namely, a pension reform, a land reform, large-scale privatization and sectoral reforms in health and education. The Head of Government stressed that the offered by the Government transformations, in particular on land issues, have caused a wide discussion in society, however, a compromise would be found. As well as the process concerning a large-scale privatization will be triggered. Volodymyr Groysman announced that the Ministry of Economic Development and Trade with the assistance of the Secretariat of the Cabinet of Ministers has already elaborated the necessary package of legislative amendments and soon the process of finding advisors for sale of major state assets will be launched.

«We are engaged in the process of establishing of industrial parks, as the Government’s target is to replace economy dependent on raw materials as well as to boost a production in Ukraine. At the same time I understand that in order to achieve that it is important to create favourable conditions», underlined Volodymyr Groysman.

In this context, the Prime Minister assured that the Government is committed to continue the process of deregulation and to further implement reform of the State Fiscal Service, inter alia improving tax and customs procedures. Volodymyr Groysman also recalled that the single electronic register of VAT refund, which was triggered a month ago, has already enabled the business representatives to fell changes in this sector.