Five essential reforms on the Government's agenda in 2017 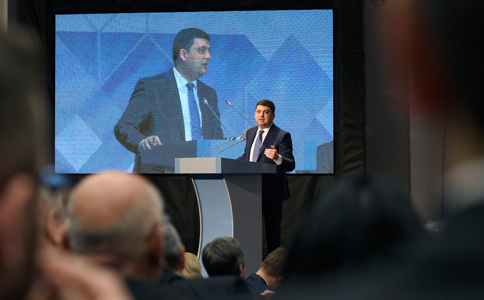 Five essential reforms on the Government’s agenda in 2017

Five key reforms that the Government has planned to implement in 2017: a pension, land reforms, a health care reform, those of education and public privatization – will put Ukraine on the track of sustainable economic growth. This was stated by Prime Minister of Ukraine Volodymyr Groysman during the II Ukrainian Business Forum.

So, the Government will shortly come out with propositions and real calculations of how to hold a fair pension reforms that will guarantee in the medium term the pension system to be deficit-free.

Also, the Cabinet has plans to carry out an open, competitive sale of over 3.5 thousand state-owned enterprises, which, according to Volodymyr Groysman, are rather ineffective, being the source of corruption and working in the interests of those who engage in their management at different levels. “They (inefficient SOEs) are costly for the Ukrainian economy and hampering economic growth,” he urged.

Besides, the Government has found a formula for how to launch the land turnover in Ukraine, whereby a strong farmer class will occur in Ukraine and will produce competitive national product and leverage additional investment in the country’s economic upswing, accentuated the Prime Minister.

Moreover, on the agenda is carrying out sectoral reforms in healthcare and education domains.